Diodes as rectifiers: half-wave rectifiers and their parameters.

This article belongs to a series of lectures on analog electronics, the paper goes by the name “Analog Systems and Applications” for the physics honors degree class. All lectures of this series will be found here. This comprises of the eighth and ninth lecture of the series. The lectures were delivered on 6th and 7th February 2018.

Rectification is an arrangement where AC current is converted into unidirectional current by employing diodes. Such devices are known as “rectifiers” and they offer low resistance to the current in a specified direction, while offering very high resistance in the opposite direction.

An ideal diode connected to an AC signal and a load resistor.

When the diode is in forward bias it acts like a closed switch (i.e. it conducts a current).

When the diode is in reverse bias it acts like a open switch (i.e. it does not conduct any current).

The input and output of a diode half wave rectifier.

Thus maximum value of current is:

Current for the half-wave rectifier is thus given by:

Average value of current (Iav) through the load resistance (RL) is therefore: 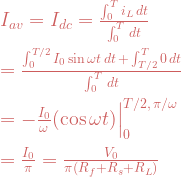 Thus the average or DC value of current is given as:

Average or DC value of voltage (Vav) at the load resistance (RL) is therefore: 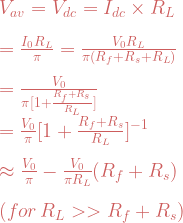 Now we can compute the average power across the rectifier load:

RMS value of current and voltage.

The root-mean-square or effective value of current in the rectifier circuit — passing through the load, can be calculated as follows.

Homework: prove this result by carrying out the integral above.

Let us assume that the output at R_L, contains multitude of frequencies, so that we can apply the Fourier analysis.

When we solve for the constants, we obtain (by using:

, same frequency as input but amplitude I0/2. This is the “fundamental frequency”. Its rms value is given by:

Thus the half wave rectifier passes AC as well as DC components.

Ratio of rectification or rectifier efficiency is defined as the ratio of the “direct output power” divided by the “alternating input power from transformer secondary”, its denoted by the symbol η.

The Transformer Utilization Factor (TUF) is defined as the ratio of the DC power delivered to the load to AC rating of the transformer secondary.

Then ripple factor is given by:

For half wave rectifier:

Thus the effective value of ac component of output exceeds the dc value of output. Half wave rectifier is not a suitable device for obtaining dc source.

PIV is defined as the maximum voltage present across the diode ends when teh diode is reverse biased and thus does not conduct. So for half wave rectifier PIV = V0 . For “no breakdown” PIV < PIV (rating).

The ability of a rectifier to maintain a specified output voltage with variation of load resistance is known as voltage regulation. 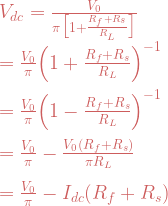 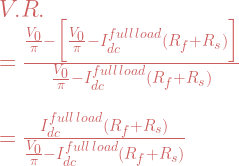 Its very poor for half wave rectifiers.