The general hypothesis I make for energy loss is (still under review) done in this scanned page: 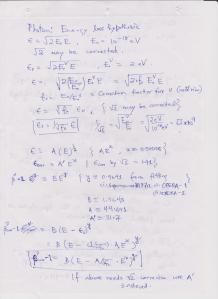 [[OK, one error spotted (this may or may not be the case, fitting in excel is so whacky, I wil try again, so read anything in the [[ ]] as just a temporal info.) : one data-point shifted in the excel worksheet to the left shell of far lesser energy value hence you see that big shift in neutrino energy; which is incorrect, fixing this one see zero shift in the neutrino corrected from uncorrected. Which means at higher energy neutrino speed excess crosses the photon energy drop, but that is not a problem since photons have dropped enough energy to be sub-luminal in present day Lorentz-invariance .. (perhaps an experimental fact of very small but definite photon mass) But the main point of superluminous behavior of neutrinos remain. (but I will review if indeed there is a 9 MeV shift in the neutrino energy from it’s 10 MeV nominal value) Although that does not matter at all to the fit. (in the loglog manner)]]

A correction in energy from 10^-15 TeV to 15 TeV despite of the photon mass being a tiny 10^-18 eV. In addition to the photon’s energy correction one also need to factor-in the neutrino rest-energy to see what we can infer about the neutrino speed excess results (or anomaly as for now) from OPERA.

there might be some errors in the neutrino-energy-loss correction as I did this quickly, I will review and update later. But the idea is clear what we intend to do. also will try to make a hand written formula scanned, so that any generalization that can be done, will be easier. Blogs are no less than a paper if done correctly …

The previous article in this series is:

In the article above a detailed analysis was presented of why the neutrino speed-excess over speed of light may actually be understood by the laws of relativity as is already known since as soon as it was accepted as a valid theory, the experimental implications and the implications of Quantum Mechanics not with standing, if we are to take into account the various energy losses in the process under revision.

In the article above there were a few errors that crept in, which do not dilute the qualitative understanding, but is significant if one needs to make quantitative inferences from my analysis. Hence I have corrected all the calculation, by checking many times over and making suitable changes to the fitting etc. I have introduced one more change from the last graph of the last article, hence now the energy loss of the neutrinos are also corrected for, in the same way the photon energy loss was considered. That changes the neutrino energy significantly only at the smaller scale of energy, eg thesupernovae 1987a was significantly shifted to the left because there could be a loss of ~9 MeV in the 10 MeV supernovae neutrinos (unless that was accounted for already which is very unlikely that it was done) But I have plotted both scenarios. But at GeV range eg OPERA point of (17,25) the energy shift (always to left) is only ~0.0003 GeV. Therfore on the log scale you see the experimental-data-points of both scene at the same place.

Another change is teh correction to the hypothesis of photon energy loss, where if you check in the previous plot you will see 3 jumbled-up points. That was spooky, why should that have happened for a smooth function (2*E_0*E)^(0.5). That led me to check the calculations again and these 3 points shifted appropriately to fit with the new curve which is a “perfect” square root power (0.50001). The numerical factor in the lead of teh power also changed significantly. Hence the “sqrt(2) corrected” energy loss of photon also changed in that proportion. But the relative shift between these two hypothetical correction is really small as you can see them on the plot although it’s a log-log scale so in a non-loglog you will see the significant difference at very higher energies (I call them hypothesis in order that anyone may wish to come up with more understanding into this basic energy loss because of rest-mass/energy of photon, 10^-18 eV).

The other change you will notice is the scales of X-axis (of Energy in GeV) has been significantly changed which goes from a 10^-13 eV to a staggering 15 TeV for the hypothesis of energy loss in photon. Actually maximum proton energy at CERN is ~7 TeV. The advantage is to see how the experimentally fitted curve of neutrino speed excess which is almost a linear power function exceeds the photon ppm energy loss hypothesis curves, about after or before the TeV range. But one need not worry because

1. the neutrino energy loss correction brings this power down to a little above the square root power (~0.79, how so nice of the nature of things, they give you uncanny hope when you introduce more and more points of caution)

2. At very high energy (huge deals of energy like above TeV, there would be a vast change in scenario and only experiments have a say, and we do not have these experimental points, eg there would be channels available to the neutrino previously unavailable, there may be a Cohen-Glashow effect, if pertinent, there could be experimental resolution issues at these energies which with large energies may entail us better understanding. In any case the neutrino speed excess went down.

Also I have shown the Uncertainity equation band (for an eye guide as an order of magnitude effect) and this clearly shows how someone can think of the effects actually effecting our experiment. eg the supernovae data-point is also quite measurable at such precision, well above the precision.The order of speed-excess per order of energy precision can be obtained from this, by correlating with the 4 curves shown here.

The main point of the change is: I have removed the MINOS 1.8 sigma data from the analysis of the experimental fit, hence the obtained curve will act as a very important guide to where one may shift if there is a better experimental result from MINOS. As an intuition for now one can see that the 1.8 sigma result extending from 3 GeV to 120 GeV data sits around the present curve in a curved way much like a butter-fly-worm (caterpillars).

I am not thinking of anything more at this moment. Hence I must take a break.