bloody hell, if you did not believe my etymo-ana [etymological analysis] {also read monosyllabic nature of Indian languages} of kyomizu dera as khyamishu-deula [temple of forgiving Lord/God ] here is what I just ran into accidentally. Which also tells why the wikipedia explain of “clear water temple” is just a Japanistic folklore syncretic naming rather than any scholarific value. This is also the official fact, but here is a more important fact: “Kiyomizu-dera is the temple of the Goddess of Mercy, a symbol of religious belief for more than 1200 years. Many tourists from overseas visit the temple…” and we have no connections and I wrote my article only a week ago, this website might have been there far before. ha, this is Japanese official site for the temple.

while on kiyomizu dera, the famous 800 AD temple in Kyoto:

check out “Jojuin” garden, known as the “Moon Garden”

so base sanscrit for moon wood be jo/co/cho/cha etc note that this is present day [tsuki = moon, tsuki in Japanese sounds like chuki] which is an alternation of chundar=sundar = beautiful and chaki=circular last two in Indianic sanscrit.

[Just so that you know cyclo >> chakra, with c_s, c_k and l_r, whoever thinks Western English derives only a few words from India will be terribly sorry to know that there are millions of such words, but this is due to an internal sanscrit understanding where words flow both ways, many so-called Indian words are actually English origin words]

While we are on Japanese temple: tried to search which temple this is near fuji sama [Mt Fuji, see below] but could not. Note 5 layers [or more?] of the temple. I had noted in september 2002 that the 5 layers of Japanese temples have to do with the 5 elements of nature as purportedly found in “Hindu-butiist” philosophy: kshiti, ap, tej, marut, byom [earth, water, fire, air, space/sky ] {like the Greek elements of matter } 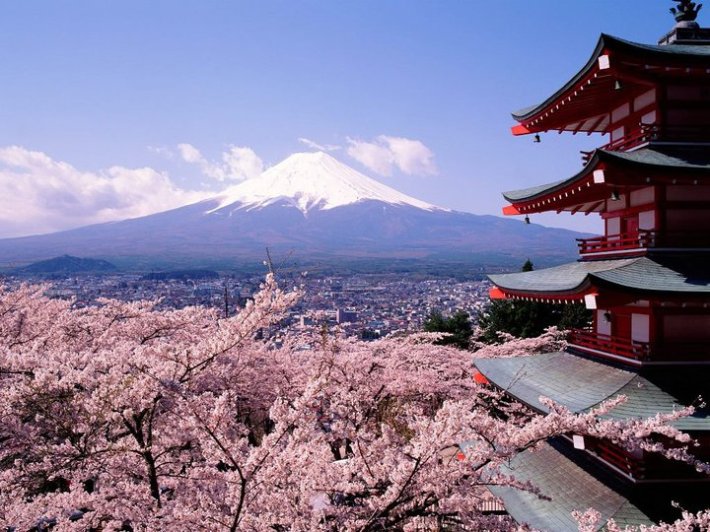 Lets change gear to include some more Japanese-Indian language connections which are dime-a-dozen.

A frog is sitting at the door. Got something important, to happen?

[The Japanese above read like: kaera ga tobira de suwatte iru, nani wo taisetsu no koto ga i desu ka?, got nothing to do with Japanese-Indian connection, just wrote this morning when saw a frg at my room]

Back in 2004/5 one evening I was walking to the parking lot in front of Kasumi in Tsukuba, near 1-1 Oho to pick my car. I hear two Japanese kids of barely 5-6 years age talking. They were arguing. I am running perhaps because its slightly raining.

I don’t know what they were talking about it but back then I understood what the phrases meant… This yo is an exclamation and you see this also in English I don’t know where it derives from, “whats up yo?” The Japanese exclamation is perhaps a completely native word. The Odia counterpart I started looking for and I think its “ho” [also he] which is literally exactly yo. We use it in Odia very prominently in friendly and dearly way although its used in a very archaic sense in literature. The go honorific in Japanese and Odia are also exactly same. One speciality of Odia is girls are exclaimed with “lo” and boys with “re”. But I think lo is simply “ro” since as per my formula L’s are Europian consonants. But then I don’t know where ro comes from. If its a native word it might have connection to Japanese although I am not as advanced yet to know.

[Edited: 6 march, 2013 Now I know the answer to both. where lo and yo come from. see in some article if you remember I have explained how l is actually y eg in its Spanish rendering the l is silent. Casedila is read as casediya?  So lo is also yo. And since g and y are alternable in many cases its all go or yo. go=yo=lo=ro and for boys the o is modified to e, re. ]

most of the time you will see a da <> ra alternation. eg [Odia <> Oriya] Since this is a relatively well known alternation people keep on changing these two. But they forget the formulaic da<>ta [da is a heavy or voice maker of ta] and ta <> sa [often because t and s occur together] and sa <> ca [cerebral ceramic can be written as serebral or seramic] but then this ca is ca <> ca [cai, chai], hence… da <> ra <> ta <> sa <> ca <> cha. Also sa <> ja/za [as in formulaic Japanese, Hiragana and connected to Indian pronunciations]. I have also told you ja degrades to ya and ya = i+a. Then add to this the fact that pseudo consonant h can be sprinkled anywhere [the Indian sanscrit is sprinkled with h and m at will, make any word sanscrit by tuning h and m into it was the goal, pun intended] The above is just an approximate summary of what analysis I have done in the last year or so regarding why we have generated so much myth about sanscrit. If you apply this much to any native words you know you can see some of the myth if you are really deeply insightful.

Also remember the t, d come in with the English sounds [as in Time, Dalton] and have not been recognized from the Indian alphabet which is why its slightly more swelled than the Japanese Hiragana. [The Japanese Hiragana is formulaicly somewhat different from Indian]

so the Udia is actually uchia=uchya = uja = ujra = udra = ucha = wu-cha etc [of the high, of the top, excellent etc] eg Land of excellent arts.  So Utkal might mean high-time, high-arts etc. [remember utkar not utkal, l is later day, utkar is drawn partly from utkarsha, utkansha which seems to be a cognate of Japanese: utkushina= beautiful/excellent]

Children, you will fall ill, go to home

It might be that only Kh = ch etc, the base consonants denoted skin in older times. The auxilary sounds that were produced wee carried up and produced newer forms.

chapa has a meaning: pressed onto therefore skin. [chop it off]

so the Odia cha-ma, charma is also a cognate of kawa, kapa, chapa etc, In Japanese hifu and ha are also skin, not hard to relate.

Look at Japanese and Odia constructions

疲れた [Tsukareta] is Japanese for tired. Tsuka [is said like chuka, tsuka, tuka etc which is nothing but Odia thaka=tired] If you like more knowledge this t^haka also consonant with saka [in Odia: weeping, could be “as when tired”] and reta appears as rita [its a verb ending just like in Japanese, with exact same meaning, eg: upakarita=helped, note remarkably in both Japanese and Odia the ta ending denotes past tense of a verb, the ta are sometimes rendered as nouns in present day usage]. another example of rita, “shobha re purita” [purita=filled] it would mean tsukareta would be something like thakarita [although thats not how its used in present day literature rules of Odia if it were it would make perfect sense, to compensate its used as “thakanwita” which in Japanese would read something like tsukanubita]See More

note the “reta” appears also in Odia but perhaps in different connotation, exactly in the meaning of double-particle de-to [no-wa appears in Japanese, does de-to appears? perhaps not, sore de-to? ]