This is an original research work of Manmohan Dash, published here, first on 12th October 2011.

A major update to this article originally published on 12th October 2011, was enacted on 7 Nov 2011.

“There is a fundamental way to understand just about anything …” — just an epithet !

It seems there are 3 remaining nails, that need to be removed, to free the neutrino, from it’s coffin; 1st two are experimental methods at OPERA and the 3rd is — well, basic physics.

Between when I wrote this article and today, a lot of understanding has developed, regarding, the results of OPERA neutrino, most of which from my blog-site can be summarized, into two categories.

— All articles that were written, after the current one, you may consider this, one of the main article, that marks my discomfort with Dr Elburg’s paper, my discomfort may have started, a little early, to this article, but I haven’t gone back and checked it.

— My discomfort with Sheldon Glashow’s paper, I have shown, with another article prior to this one, but it didn’t take me long, to dwell on the latter, since, there were not anything, that was technically wrong, although Glashow’s analysis didn’t convince me as I had mentioned in that article.

So here are the two main summary, of the understanding, of my blog’s elan.

I had started this rotation problem, as a classical motion problem — and will eventually try to link, to the relativistic motion effects, although I have successfully pointed out though, that these are beta^2 effects, in both cases, hence the classical effect, is, good approximation of the scenario.

I will try to bring a better review, in the near future, but for now, I am commuting to another town, to welcome a newborn kid, to our family system, which is not really badly synchronized. My elder sister got another baby-daughter, just yesterday. So, I will put the calculations — that I had done, before writing this article, and I had promised that day, that I would update this, but haven’t had a time, since most of the debates, concentrated around the paradigm, created by Dr Elburg’s paper.

So, here is another development, that is very crucial — from my blog-site.

— Today I posted, the latest diagram, which perhaps needs more explanation from me; why it is a wow thing to notice, but there is a limit to human elation and I disgracefully cut myself down, for lack of focus.

Here are the calculations of this article. 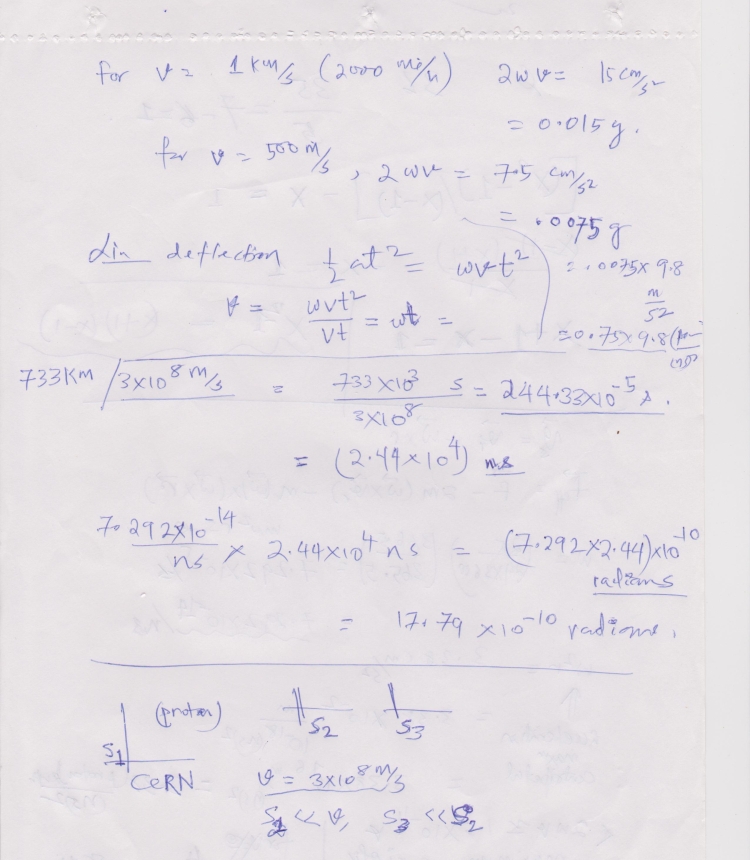 The 3rd reasoning — point 3 at top, comes from the basic precinct of Classical Mechanics and Relativistic Mechanics.

All terrestrial — that is earth-bound, computations, can be considered from an external frame, which is bound to a distant fixed star, so that from that view or f.o.r., the calculations and laws, are correctly implementable. When there are other frames, or f.o.r. attached to bodies, that are accelerating, linearly or in an angular fashion — that is rotating, these latter are not inertial f.o.r. hence, additional care is necessary, before we can obtain correct results, from the calculations, of the Laws.

eg Our earth is spinning around itself, rotating around the sun in a perennial orbit and the Solar system including the sun is in motion wrt the Galaxy c.o.m. — center of mass, and the Galaxy is drifting and expanding in the Universe.

For terrestrial measurements, the earth spin and it’s sidereal motion — that is motion wrt the distant star, because of orbiting around the sun, must be taken into account. For most classical processes, on the earth, that we can observe unaided by instruments — such as the motion of a football, kicked in a stadium, this does not bring any significant deviation, from the actual result.

But an airplane or a space-projectile, like a rocket, may be significantly affected, by such non-inertial-ness of f.o.r., attached to our planet earth.

One of these effects is maximum, along the equator and minimum at the poles, because of the size of the circumference, at these places, along which rotation takes place.

— The other is reverse !

At any latitude, the effects — such as angular and linear velocity, are reduced, by the cosine of latitude. For a maximal effect, one can consider, the maximums, at the equator and the maximum earth radii, which is 12 kms, above the average earth radii.

Thus, the spinning of earth, gives rise to two pseudo forces, that need to be subtracted, from the regular forces, to get the effective inertial forces, in the problem at hand.

One of them, is the centrifugal force or outside the rotating earth, the centripetal force, which comes because of the rotational non-inertial-ness of the earth, along the axis, through the two poles. The earth spins at ~ 500 m / s = 0.5 km / s at the equator — that is, > 1000 miles / hr. This corresponds to a pseudo acceleration — or, centripetal acceleration of about 3.38 cm / s.s, or 3.38 aua. — This result is with sidereal or distant star correction.

This is usually balanced, by the attraction of the sun. — I did not check the last statement, but it is true, as I have read from various sources, such as Weinberg’s text on Gravity.

The other pseudo-acceleration is called Coriolis Effect. It becomes active, only when an object has a relative motion, wrt the non-inertial f.o.r., all objects at rest, in this frame, experience; only the centripetal effect. This effect is zero, at the equator and goes down with latitude in both hemispheres, in opposite direction, respectively, in the northern hemisphere such a deflection, is always to the right of the original motion, of the particle and opposite for the southern hemisphere.

The detailed values for our situation of OPERA time of flight, is available, in the scanned pages above.

The 3rd effect is associated with relativistic transformations, where the changing speed of a particle, makes the f.o.r. of the particle, non-inertial, wrt the Lab Frame and infinitesimal inertial f.o.r. are considered, for Lorentz Transformation. This gives rise to, secondary boosts and rotations.

The rotation is called a Thomas precession. This angle or frequency, depends; on the various velocities associated. But for our purpose, since the neutrino and photon travel essentially at the same speed — the speed excess is only 25 parts per million parts, hence any non-inertial effects are only minuscule.

So, we do not need, any Thomas precession frequency analysis, any more. I will post another article, with Longitudinal Doppler considerations. If I could, I will think about how Sagnac effect fits, into the whole situation. The effect of solar radiation is considered in a GPS satellite system. One can also integrate the potential energy of the Sun and other perturbing masses, in the Solar System, by having a good functional trajectory of the satellite, in a convenient coordinate system.

Also I have noted in the article posted today, 7 Nov 2011, one can have a general relativistic treatment, to the Centrifugal and Coriolis Effects, described above, by converting their forces, into potential energy terms and invoking the gravitational time-shift as treated in Weinberg’s text.

The 2nd step of this will only lead to an effect, consistent with the 0.3% or 0.6%, of acceleration due to earth’s gravity effects on the satellite. The perturbation of Sun and other planetary masses, will cause a very very negligible effect as is obvious. You can also read this article; Sun’s and other massive bodies effect on time dilation of atomic clocks in GPS. to see, why these are negligible.

I will attach the calculations, I have made, once there is internet and power, so I can scan the papers and post. Here is the result. — Update, well, now the scanned pages, have been attached above.

Maximum comes from maximum earth radii of 12 km more than average, equatorial spin of earth — at any latitude, it goes down, because of cosine. Any zero contribution because of direction issues, is not given priority, hence maximum is over-ruling as it comes from maximal deflection.